In 2016, while the world seemed to look inward (e.g. Brexit, Trump), it’s great that we Indians managed to largely remain a liberal lot. We Indians retained our firm belief in free markets and unanimously voted against anything that threatened the level playing field. We shot down clever monopolistic ideas such as Airtel Zero and Facebook FreeBasics and became unabashed fans of global companies such as Amazon & Starbucks.

So it wasn’t surprising when most of Indian startup community joined hands in criticizing two of our most successful entrepreneurs – Sachin Bansal from Flipkart and Bhavish Aggrawal from Ola when they urged the government to support them  like China does.

The problem with China model

Sachin and Bhavish have their reasons, but are perhaps forgetting what they seemed to know so well until recently. While protectionism may help in short term, it only makes companies incompetent in the longer run. Driving out global companies from Indian market will also deprive us of the world class products that our consumers love and inspire our entrepreneurs.

This “fair competition” in India has been instrumental in preventing monopolies by local companies, which is what has happened in China where a handful of companies such as Tencent, Alibaba, Baidu completely dominate many markets. Without this competition, we simply won’t have created strong companies such as Paytm, Flipkart, Ola, Oyo Rooms, Zoho, etc in the first place.

But are Indian startups ready to fight this competition?

That said, Sachin and Bhavish (and a few others) do have a valid point. While we invite global companies to India, are we creating local companies that can compete with them?

Because if not, then the whole purpose of “fair competition” will be lost. Instead of monopolies by local companies it will create monopolies by foreign companies. In fact, this has already happened in India where many products from global giants such as Facebook, Google, Microsoft and Amazon completely dominate the various markets.  And this domination is only accelerating – companies such as Slack, Dropbox, Snapchat and Airbnb have gained significant market share. And tons of others are preparing for the onslaught in near future – such as Netflix, Spotify, Stripe, Trello, Intercom, Medium, AngelList & ProductHunt.

So why do foreign startups win and how can compete with them?

Unlike a lot other people who blame the weak visions of our entrepreneurs for this, the truth is that we simply don’t have the supporting ecosystem to create world class startups. We still don’t have the 3 basic ingredients  — easy access to capital, availability of experienced talent and a mature ecosystem that offers mentors, initial adopters, supportive social fabric, better infrastructure and a strong legal system.

Yes, things have improved in last 5 years as far as funding and talent is concerned. But the big problem is – our startup ecosystem hasn’t improved much. Yes, startups are now more mainstream but we are still relative immature – we don’t understand failures and over glamorize startups.

The biggest opportunity missed here seems to be getting contributions from startups themselves. They often see themselves as only the “beneficiaries” of this ecosystem — not as “givers” who could help others too. Unlike the bigger startups in China which actively invest or partner with other startups in many different sectors (such as Tencent going out of the way to help Didi Chuxing) those in India seem to be more internally focused. Take a look at Alibaba’s investments in different sectors recently: 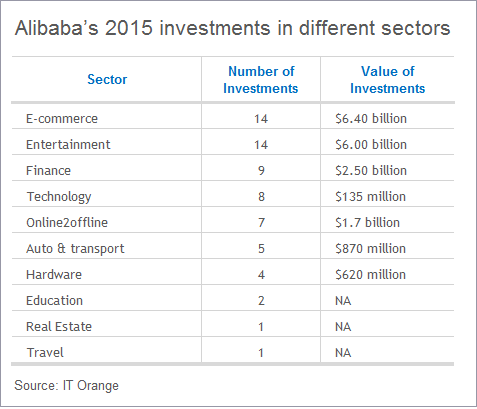 In contrast, contributions from Indian startups mostly come in the form of small angel sums or pep talks at startup events by their founders in their personal capacity.

Building ecosystem is a shared responsibility

However, let’s get it straight – supporting other startups is not a responsibility of only the bigger startups. There are thousands of startups who could pool their resources to build a strong ecosystem. They are often too internally focussed and are uninterested to do simple things that could help the ecosystem. They could be early adopters of other startups, mentor young entrepreneurs, promote them in their marketing channels or provide office space to others.

To give a small example, at our startup, when we research products or services to buy, we make it a point to check the Indian alternatives available. If they offer desired quality of service at similar price, we try them out first. Today we use Sendx (instead of customer.io), Pepipost (instead of Amazon) and SendOTP (instead of Twitter Digits).

We also offer free promotion space to some high quality startups in our online events that attract thousands of high value professionals:

Depending on your startup, you way to help others might be different. You could perhaps partner with your favorite Indian startups, give them honest feedback to improve or simply have a Friday post to feature them on your Facebook page.

Let me know if your startup would like to play a more active role in building the startup ecosystem in India. We can explore some ideas and take it to the 1600+ startups that use our platform.